Time was when men and women customarily wore hats.   My father used to get very fond of his dark brown trilby and evade buying another, so my mother would get it for him.

But then he’d shy away from breaking it in, he’d say the older one was more comfortable, she’d say it was shabby and they’d disagree.

On one occasion that disharmony was part of something else – probably my mother wanting to arrive with five minutes to catch the train, while my father preferred to have us all lined up with the luggage and an hour in hand.   Anyway, we’d got through that.  We were on the train, settling into seats when – as the train gathered speed – my mother leapt out of her seat, wrenched opened the window (I remember the arc of her body) and pushed my father’s old hat out.  Gone.

There was a moment – now what? – and then they both began to laugh.

I have passed hats on but never thrown one away.

At a sale in milliner Gabriella Ligenza, I bought a treasured ponyskin slouch, the brim topstitched taupe satin which I gave to a beloved friend when her hair fell out from cancer drugs.  She was very tall and looked wonderful in it.  I remember her stroking it, murmuring “my little pony”.

And though as the money changed hands, I thought I bought the black velvet Joan Crawford special for myself, once I got it home, I knew it was Nikki’s Christmas present.  She has long blonde hair and looks great in black, which sadly I don’t any more.

Tucked into my hatbox there is a pastiche of a 1940s silk shell with just the right amount of flowers, feathers and ribbons, made by Jane Smith who makes for films.  Bought for the bat-mitzvah of a friend’s daughter, it was as they say “a bit of a statement” so I snuck it off as soon as I could, only to spend the whole afternoon with men saying “Please put your hat back on – my wife would never wear anything like that – isn’t it lovely?”  and women saying “Please put your hat back on, I’d never dare wear that, I don’t know what my husband would say – it’s so pretty.”

Such is the power of the hat.

It’s 20 years since I bought it and it still makes me smile when I try it on and play dress up.

Imagine too a small hat, apostrophe shaped from every angle, made entirely of quails’ feathers, brown, grey and cream, and that’s what I wore to my second bar-mitzvah, where I sat, arrested by the mixture of formality and passion – and the food that followed !  Hollywood dream catering, loads of it and absolutely peerless.

When five years later the same hat took me to a Buckingham Palace garden party with Cookie my best ever radio producer (her mother couldn’t make it) I was so charmed to think that with a different dress, bag and shoes, the hat was still smiling away – that I wrote to the designer Nerida Fraiman to tell her what it meant to me to have that kind of sartorial security.

And then there is the leopard.

Now, before you rise up in wrath, it’s been dead for most of my life.

And yes, I have seen a leopard in the flesh so to speak and I have no desire to separate the cat from its covering.  The hat was a gift from a friend of a friend to whom I rendered a small service and the hat was my “tip”.   I wore it this winter with a lacquer red coat and high heels – all very old but the right shapes for glamour – and got hit on by a green eyed Italian Lebanese half my age – which was very cheering and put a spring in the step. 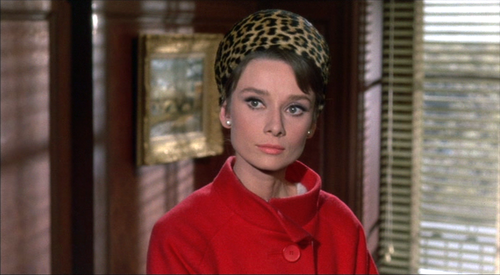 There are sadly a lot of bad hats – silly, frilly, over trimmed, the wrong shape, the wrong size, totally unfascinating fascinators and I am only so glad Princess Eugenie sold hers after the Royal Wedding, though it was an act of charity to buy it.

There are people who hate hats, people who have difficulty with hats and those who make affectation out of it.

The right hat is becoming.  It says the wearer isn’t afraid to take him or herself or their notions seriously, for example my friend Wal in his pre revolutionary Russian mink or Ellie Haddington as Hilda Pierce in the most recent run of Foyle’s War – cold intelligence in a classy felt.

The slogan used to be “if you want to get ahead, get a hat.”

And now, apart from wearing one because you have to, the occasion demands – people who wouldn’t dream of wearing one love to see somebody else making a millinery statement.