30 years ago (well, nearly – 1985) I put my name in the front of a book at the radio station where I then worked.  The idea was that, whether the book was used or not, when its day was done, it would be passed to the person whose name was in the front.
The book was the Women’s Institute Calendar of Feasts by Maggie Black. 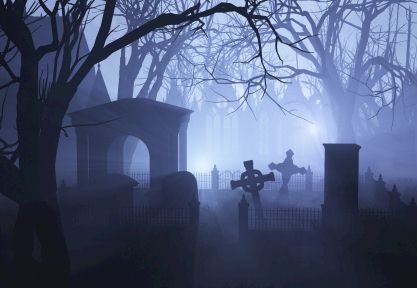 It contains some uncredited pen and ink drawings and information about how life was regulated, seasonally and by the Church, till the two crossed over and you had all sorts of feast days, something to aim for in the endlessness of rural work which nobody who hasn’t done it understands.
I can’t sentimentalise about land. I’ve seen it worked and it is unremitting labour.   And  – whether it’s our country or another, that’s where food comes from  – I have respect for the land and the people who run it.

There used to be a big hooley at the end of October – first All Hallows (October 31), then All Saints (November 1) and finally All Souls (November 2), only one of which now survives.

Three days of mystery meant you’d have a bit of fun and extra food, lots of teasing and magic (how much you believed was up to you) and drinks, hot and alcoholic.
The celebration of any of these now, in certain parts of the world, would mark you out for trouble.

Today’s shops are piled high with pumpkins but when I was a child, I think the only pumpkin I ever saw was in Walt Disney’s cartoon of Alice In Wonderland.   We used turnips.  We hollowed them out, fixed a piece of candle inside and several of us together, draped in black, used to go round to neighbouring houses, ring or knock and when the door was opened, line up behind the lanterns and mumble threateningly.
For this reason we were called mumblers.

Invited in we were given soft drinks or hot drinks, depending on how cold it was and invited to play bob apple 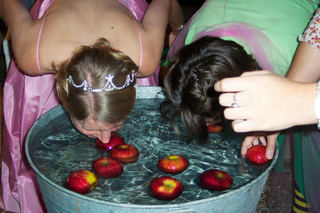 – apples floating in a tub of water, two partners with their hands tied behind them, to see who could pick up the apple in their teeth.  There is an older version with the apples suspended and swinging but then you need something to hang the apple from and even houses then called modern didn’t have handy beams.

Once you had your apple, you were given a knife and had to peel it all in one.  If you broke it, it was no use.  If you got it off in one piece, you threw it over your shoulder and it fell, it was said, with the initial of your true love amid much nudging, shrieks and giggles.

If it was cold you might be given soup or a jacket potato – I have eaten jacket potatoes on every possible festive occasion but the best were cooked in the ashes of the Guy Fawkes’ Night bonfire on the common when I was about 10 – and I can taste them yet.

My nicest grown up experience of Hallowe’en was the first year in South London when three boys knocked at the door, yes, dressed up but not plastic heaven, two medium to tall – I’d say maybe 12 years old – and a smaller figure who may have been the same age but sounded younger.   I raced for chocolate, satsumas and 50 pence pieces which were received with enthusiasm.  “Wow” said the smallest figure “food AND money!”
They were kids.  It was lovely.

The following year I got in the chocolate bars but nobody came.  So I took them to the Coptic Church nearby, thinking they must have a Sunday school, and thus heard a fragment of truly beautiful and unexpected music – their service was in progress when I arrived.

Hallowe’en has not come to call since then.   I have heard increasingly uncomfortable stories about glass in Hallowe’en food, children expecting money, the Transatlantic “trick or treat” gone mad, the elders dressed up in every kind of Gothic gear, the youngsters in imitation.

I didn’t have any idea about what All Saints or All Souls’ night might be beyond
Mussorgsky’s “Night on A Bare Mountain” in (again) Walt Disney’s Fantasia.   My Hallowe’en is like all questionable anniversaries (New Year’s Eve is another): I treat it with profound respect, light candles and stay quiet.  There is much unrest and discord in the world.   If I cannot fix it, I will do my best to stay away from it in the hope that it will burn itself out, not burning too many of us on the way.

One response to ““Haunted””