When I couldn’t sleep one night and even the rocking of the red boat with a painted eye in the blue of a Cretan bay didn’t work,

I began to think about Middlesbrough – no, not the football team, though my father did traffic duty at Ayresome Park and I was thrilled to discover that the name of the school where he last taught was that of the father of Gertrude Bell (see Daughter of the Desert by Georgina Howell).   I began with the ginnel.   I had to look the word up.   It says “northern British, probably a corruption of “channel”, a narrow passage between buildings.” I don’t recall anybody ever saying it except my parents.

I closed my eyes.

The ginnel led from Thackeray Grove to Briarvale Avenue, between houses, earth and gravel underfoot, the odd groundsel and dandelion, the boards of the edging fences dilapidated and worn. But once you got to the ginnel, you were nearly home because Briarvale was a cul de sac and we lived at 21. I was bullied at school, wrong voice, wrong face: the ginnel was safety.

Behind my closed eyelids, I began to recall house by house, who lived where in that street and in the adjoining Greenwood and Cleveland Avenues. At 19 I left 21 for Tenafly, New Jersey where I cared for 11 rooms and four children (16,12,10 and 6) – for $25.00 a week which even in 1963 wasn’t much – but the faces came back clearly – and benignly, voices, gardens, kitchens, clothes and incidents – and I fell asleep. I have revisited since, and it makes me think that there are places where you are emotionally as well as geographically located.   Things come together and stay with you, they have special meaning. Looking back I see that what I had at home far outweighed what happened to me at primary school.   Bless my parents, if I had gone shopping for them, I couldn’t have done better.

In a recent newspaper, there was a picture of a faraway man leading his working animals through rice paddies in China today.

It reminded me of a print I bought from Getty Images, the original dated in the 1920s, and I was struck by the eternality of it. Maybe that’s what made me think about how some scenes stick, why they stay with you…

For people who live outside it, the city is a constant, the stones and bricks of us and them, but we who live here are very aware of how much the city changes like an architectural amoeba that pushes against an edge and retires from it, only to surge in another direction, apparently unchecked.   Whether Brexit is hard, soft or another Sarajevo (ie the beginning of the end of an era), the pulling down and the putting up, the installation of wiring, train lines, sewage and technology is going on all round us.

So the places that we remember, unchanged, associated with that time and place and feeling, are the closest to eternal we’re going to get and have all the more importance for that.   Remembering somewhere by smell (my first arrival in Crete) is different from remembering how I saw the sunlight fall on the beachfront at Sitia. I remember the light on the Seine but not the sound of Paris. Though I don’t have to close my eyes to conjure George Washington Bridge in New York, 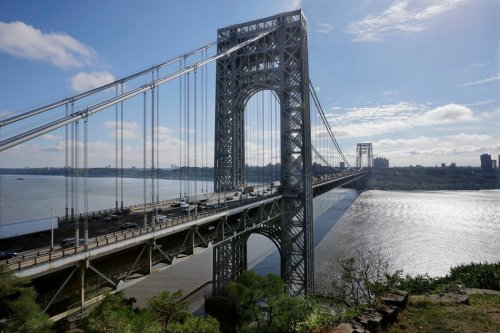 or to hear the noise of the street, either at Bleeker or by the Plaza Hotel.

There are places where the quiet is a sound of itself.   I remember like a stop shot my father at the kitchen table the Sunday morning we knew that my sister’s fiancé had been killed.   I remember the delight on my little son’s face when he saw the table and his first Sunday roast – “Pretty, Mummy, pretty !”   I can smell it, hear it, see it, feel it – that same voice that welcomed me back from Dublin at the arrivals gate, racing from his father’s hands – “Mummy, mummy darling !”- everybody turning to look at the big little boy with the dark brown voice. I keep very few pictures – they are in my head. And I hadn’t thought a table or a metal gate would be part of my emotional geography.