Disher came to supper, a vision in a guava coloured

tailored shirt. I had a top that didn’t work for me, in which I suspected she would look wonderful. She handed me the shirt. “Try this on” she said.   But it’s new, I protested. “I am not wedded to it” she growled. I did as I was told (you do with Disher). “Wow !” she said. “Swap !” I put the shirt in the wash and a button came off (are you listening, Conran?) and of course I hadn’t got the right colour cotton. I remembered a fabric shop up the road where they might …. On the way I went past Edwina the milliner, the nicest woman, and I saw her at the door. “ By any chance, do you have … ?” I asked, showing her the button. “Of course, come in” she said and swept me through the little shop into the workroom where I stopped, struck, hand to mouth.

Though a gynaecologist once told me that men’s spatial concept is far better than that of women, I’d guess this a floor space no more than ten feet square and nearly twice as high, piled with buckram, feathers, flowers,

I love hats. Just before I ceased to be able to wear black (kills me where I stand and not being able to wear it taught me a lot about colour) I bought a small close fitting number with exquisitely imagined black felt roses which had to go to Daisy who can wear hats and can wear black. Dammit.   A couple of years ago, I went in to try on one of Edwina’s hats which made me so happy, I almost bought it – though I was deep in survival mode and you can’t eat hats , can you ?

The hats I have collected are deeply personal and they don’t date: a structured beret in leopard (I love leopards and that cat was long dead before I got to it): a re-imagined 1940’s cocktail special by Jane Taylor: an Isabel Marant knitted number which only works because there is enough of it to drape a bit, kinder to the face: a feathered beauty by Nerida Freiman which took me from bat mitzvah to Buckingham Palace with several years in between: an Armani turban in natural linen, plain and perfectly cut: and a fisherman’s straw (£5) from the days when such things came from the country of origin and not China.   In the winter, I wear hats.   I am still adjusting ageing thermometer to summer, 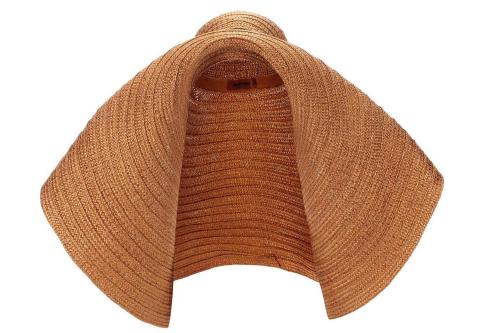 the quality of the heat having changed to something much less benign than it used to be. (Did we ever think what would happen to climate when millions of people all had freezers and fridges, power showers and dishwashers on top of electric light and stoves ?)

And once upon a time, hats were essential. In Enemy Women by Paulette Jiles, the first task of her heroine up on escaping is to find something to cover her head, recognising that without, she would otherwise be wholly noticeable. To cover the head was a token of respectability, even modesty.   In various places in Africa, it still is. The family is extended, you might meet an older relative and you must be ready – head covering is de rigueur. We used to say “If you want to get ahead, get a hat” but nowadays, unless you wear one for essential warmth or shade, they are the province of high fashion, idiosyncrasy, or expected formality.

I remember reading that the Queen’s hats have an arrangement in side them that make them stable, so that no matter the weather, Majesty is never seen to touch her hat.   I hope it isn’t too uncomfortable.   Men wore hats too, sometimes doffing them, then more recently touching them with a finger in salute.  When that happened to me, earlier this year and the first time for ages, tit for tat, I bobbed a delighted curtsey.