The Bowl as Witness

Posted on October 7, 2013 | 2 Comments
As I lingered over an elm salad bowl 35 years ago – and it wasn’t cheap then – my mother offered “I’ll buy it for you ” and, as I hesitated, she added
“On one condition. You take it with you.  You’re always saving up for something and then you move on and leave it.   Look at the stuff you left with Michael .”
I forbore to answer that the end of my first marriage after five years didn’t seem like the occasion for an argument about who owned the rosewood handled steak knives.
I promised I would take the bowl with me.

When I left my husband, it was not as has been alleged because I was a ravening careerist.   Not me.   I could have been impressive in the role
but I never learned the lines.
I left my first husband because I couldn’t breathe.
Beyond him, over his shoulder, I seemed to see a circular porch leading to a whole corridor of other doors and I knew that if I stayed with him
I could never get into the revolving door, let alone open another of the doors behind him.  He really was a ravening careerist and if you made second on that list
to film, you were doing well.  I think I made third.
So somehow I met and went to live with a wonderful talented madman who had a house in North London which seemed like riches indeed to me.
I never had anywhere settled to live.   Which means I didn’t want it or I expected it to be provided.  (“You’re in love with the house” said my mother dryly and she was probably right.)
But Leon (not his real name) was the only person who ever encouraged me in our delightful time together to try some amiable form of bondage, using soft ropes and high beams while wearing a black lace corset which looked wonderful and was (in Cilla Black’s phrase) like wearing Brillo.  I laughed myself silly till he was thoroughly put out and put off, and released me.
The bowl was witness. 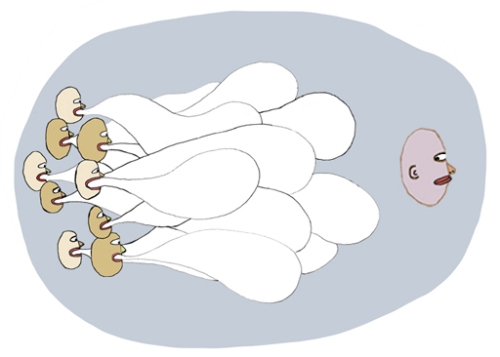 I moved out to live in a cupboard somewhere in the area where I never really unpacked because there was no room and I hated it.  Waiting to be rescued, you see.
But then I met Joe (not his real name)  who had a small business, devoted friendly parents and who told me he had never had a really successful relationship with a woman.
I don’t mean that he was really into men – he just thought he wasn’t very good at women.   Which he proceeded to disprove in every possible way with me.
He was funny, he was practical, he cooked like an angel – and I made the salad.
Enter the bowl.
He also revealed himself as somebody only lacking a little encouragement to be a major horizontal event – talk about making up for lost time.
And in those carefree days of largely reliable contraception, HIV and AIDs unheard of, before the miserable days of “having sex” which puts it on a par with a cold or an overdraft, and competing all over the media
– it was, dear reader, one of the very few things I was any good at.
And the bowl saw it all.
I left him because I fell in love with Dov (not his name), another undervalued man just waiting under the gooseberry bush of chance for encouragement.
He was wonderful, intelligent, amusing, thoughtful… At their first meeting, my mother came out to the kitchen to say “Well, I can see why you’re with him.  He’s beautiful.  But he’s a boy …”  (Four years younger than me and I didn’t do that often.)
But he didn’t want to marry, he wasn’t ready for children and he was a Jew.  His family wouldn’t like it.  I offered to make a conversion (my father was a Jewish son).  He was appalled.

I never fell out of love with him, I just buried him deep in my mind, one of two men I would very much like to meet again and talk to because they meant something so important to me and –
like a fool – I only realised it in retrospect.  We didn’t argue very much, we just drifted.
And the bowl watched.
Fate intervened.   She (I just know fate is a woman) sent me my second husband who married me, fathered the son I love, behaved well, less well, shabbily over 20 years.
In the family we were, we used the bowl daily.  One night, I was speaking to a group of Jewish women and I referred improvisationally to my husband as Supergoy.  They laughed and I knew why.  Sadly, I wasn’t one of them but I wasn’t one of him either.
We fought.  I shouted.  He tried to frighten me.  It is said “perfect love casteth out fear” so I think I must have loved him very nearly perfectly because I was only afraid when he was gone and I knew that was it.
I took everything that was mine including the treasured elm bowl.
Heaven help me if the bowl speaks.

2 responses to “The Bowl as Witness”