Birds are a bonus like feathered lilies of the field.  They exist, small miracles of engineering, parallel with but independent of humankind, often wonderful – literally, full of wonder if I am the onlooker.  A feather can fill me with awe.

At the lowest point in my life, I stayed in what had been the family house.  The bricks soughed round me.  The man went on the Monday, the contract for my job was not renewed on Thursday.   So I was stuck, and I sank like a stone.

One day, looking out of the window of the room earmarked as my office, the promise of which had convinced me I could put up with a house I disliked for too many reasons to list, I saw a tiny and particular silhouette with a distinctively upright tail – a wren. 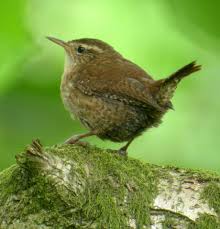 I rushed for my spectacles.  It was indeed a wren, I heard its metallic surprisingly assertive call.  And then it flew away, a soft bullet.

I recalled that my mother loved wrens and I had bought her a china one she kept on the mantelpiece.

There was more than the odd one in the small town garden at the back of the house.  Do you think you see these things when you are ready to?  I had not noticed them before..  The size alone fascinated me.  One day I saw two clinging to the ivy at the back of the house.  They must have nested somewhere nearby because I saw them again, teaching their fledglings to fly from the spine of nearby garage.  It was comforting that something was so alive when I felt so blighted.

One day, walking down an unfenced path to the station, I heard and saw the little bird.  So I began to add another line to the prayer I repeated for my own guidance and the protection of my son –“ and please God, take care of the wren.”

I had a good friend who was terribly ill, life leaching out of her like water under a door.  Her decline paralled the first two years of my emergence from the tunnel.  I saw the wrens at intervals, heard them, glimpsed them in flight while my friend Jizzy’s life ebbed.

One night she stayed with me and a picture, heavily mounted and properly hung, fell from the wall.  She was sleeping on the sofa in the living room and as I skittered down the stairs in response to this odd noise, she called to me.  I told her what had happened. “A picture fell down?”  I had a dictionary of superstitions to consult but she didn’t need it.  In Scots tradition, it presages a death.  It was her permission.  She killed herself shortly after my birthday.    Her life had become unbearable to her, she had tried before.  This time, she made it. 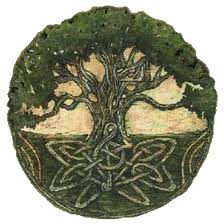 And when the clearing up and the funeral were over, I looked up the wren.  In English tradition, “the cock robin and the jenny wren are the Queen of Heaven’s cock and hen.”  I saw them again and again.  I listened for them. The smallness, the plainness of them mattered to me. I’d had a lot, this was a new and cherished little.  I read a painstakingly recreated Celtic novel in which the wren featured as a sort of spirit guide.  The Romans and the Manx called them holy birds, country people attribute power to them.  The wren was my newly recognised joy.

When the winter grew colder, earlier with cold rain, later with frosts and snow, the wrens were casualties, tiny things, easily chilled.  But then I heard one in a garden near where I sometimes walked, up a different street, in another part of town.

There are a pair in the dense shrubs on the other side of the street where I live now.  I hear them sometimes when I go out for the papers in the morning.  And the other day an old friend at the end of a completely different conversation suddenly said  “And I have found you a wren’s feather.” 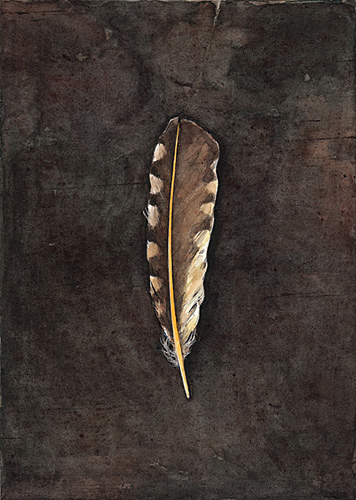